One day in January, I happened to be passing a post office, when I received an email. I stopped to check it and found it was from Amelia in Australia. I used to learn English from her when she was in Japan several years ago. Actually, she was supposed to come to Japan a few days later and we were going to meet with other friends. According to her, she tried to contact three Japanese ladies among her old students, but all the emails she had sent to them failed to get through. She wanted to meet them while staying in Japan. So, she asked me to send them letters for her to let them know about her visit to Japan and her contact information.

Reading the message, I looked up from my phone and turned my head to the left. Yes! I was in front of the post office! Amelia asked me to print her message out and send them to the three ladies, but it would have taken a lot of time if I had gone back home, made photocopies of her message, written letters, and then gone outside again to send the letters to the ladies. So, I entered the post office and bought three postcards. I decided to write Amelia’s message in handwriting. Actually, there was one more reason to use postcards not envelopes. I thought that they might have been suspicious of my letters before opening item because I didn’t know the three ladies at all. But postcards wouldn’t make them uneasy because they could check my message on the spot. 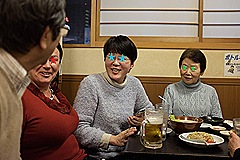 I added some information about me, such as my name, about my relationship with Amelia, and my phone number, to Amelia’s message on the cards. Hoping the message would work well for a rendezvous with Amelia, I sent the three cards right away…

The next afternoon, my phone rang. The call was from an unknown number. I answered the phone, wondering who it was. It was one of the three ladies. I was surprised at the sudden phone call and the speediness of Japan’s postal system. I was relieved when she told me that she would contact the two other ladies and Amelia. She thanked me which made me very happy. 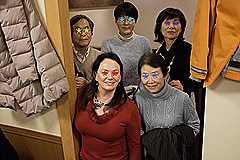 Actually, that night, the other two also got in touch with me. One called me on my land line, and the other emailed me. I knew that they had both received my postcards and a phone call from the one who had phoned me that afternoon. I was very happy to know that the three ladies had already decided the dates and time to meet Amelia in Japan.

Of course, I myself had an opportunity to meet Amelia with some of my friends. We met at (Sekai-no-)Yama-chan, a chain restaurant of ‘tebasaki,’ or fried chicken wings, in Nagoya on January 22. Amelia was as beautiful as before. Happiness was radiating from her eyes because she came to Japan with her boyfriend this time! We hadn’t met each other for a long time, but once we started talking, it was as if we had never been apart. We enjoyed chatting and eating lots of ‘tebasaki.’ I had a great time! 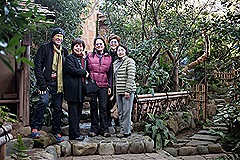 Later, I found out that the three ladies had had a wonderful lunch time with Amelia and her boyfriend. I was so happy to see their photo taken that lunchtime. I’d like to go to Australia to see Amelia and her cat, Poppy, someday!