“Speaking of “golden poop”, there’s an interesting story on poop in one of the old folk tales of Japan.” Masa said that during an English class and he introduced the story. It was really interesting! I would like to tell you about it. Before that, I suppose many of you must be wondering what the “golden poop” is. The topic of the English class was a toilet theme park in Korea that day. It was from Breaking English News, which is an English learning site (http://www.breakingnewsenglish.com/index.html). I’ll show you the news first.

A city in South Korea has added a new attraction to its cultural landscape – the world’s first “Toilet Theme Park”. The Restroom Cultural Park in the city of Suwon is proving a huge hit with locals and tourists alike. The latest tourist site is dedicated to the memory of former city mayor Sim Jae-duck, affectionately known as “Mr Toilet”. He believed the toilet is a very important and under-appreciated aspect of world culture. Visitors to the park can admire its toilet-bowl-shaped exhibition hall as well as dozens of bronze statues in various toilet positions. They can even sit on Mr Kim’s original toilet, which includes a full-length glass door that mists up when it is being used. 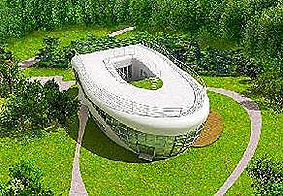 Suwon has become well known for the promotion of toilet culture. The city attracts toilet-related artwork from around the world to its galleries. It famously hosts the Golden Poop Art Festival – a celebration of one of the calls of nature. The city also lists dozens of its own public toilets as tourist attractions on its website. Sim Jae-duck’s own giant, toilet-shaped house, now a museum, should be the must-see for enthusiasts. Mr Sim’s fascination with toilets supposedly began because he was born in the smallest room of his mother’s house. He said in 2007: “The toilet…can save humankind from diseases [and is] a place for introspection. The toilet is also a central living place that possesses culture.”

Hmm…interesting! The news made all of us in the class, especially our teacher, feel like going to the theme park. Well, I’ll introduce the Japanese old story of “the golden poop” then…It is in “Uji Shui Monogatari” which is a collection of Japanese tales written around the beginning of the 13th century. The author is unknown.

Long time ago, there was a man named Sadafumi. He was called Heiju. Being noble, good-looking, and a charming talker, he was very popular at that time. Because he was confident in himself, he made sexual advances toward all women he liked.

There was a maid of honor called Jijyu at the residence of another noble man named Tokihira at the time. She was young, very beautiful and clever. Heiju tried to relate her with zeal, but Jijyu ignored him and had never even written back to him. Heiju was heartbroken and wrote to her, “Could you please at least write back to me ‘I saw this letter’? I think of you all the time.” Then, a servant brought Jijyu’s letter to him. Heiju was very glad to take it and opened it immediately. However, there were no words from her, but a small piece of torn paper was pasted on a sheet of tissue. She tore the part of his message “I saw this letter” from his letter and pasted it on the tissue as her reply. 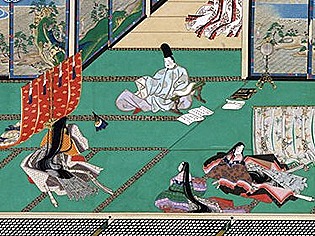 Heiju was chagrined. That was at the end of February. He decided to give up Jijyu and stopped writing love letters to her. But one night around May 20 when it was raining, he thought, “If I visit her on such a dark rainy day, she might see me even if she is cold-hearted.” So, he went to Tokihira’s residence at midnight in the pouring rain. He let a servant give his message to Jijyu: I can’t bear my loneliness and have come to see you. The servant came back to him and whispered, “My lord hasn’t gone to bed yet. So she can’t make her exit. Would you please wait for a while? I’ll tell you after she left for her room.” Heiju was delighted to hear that. He was hiding in the darkness and waiting for the servant.

About two hours later, it seemed everyone had gone to bed. Heiju heard of someone’s footstep coming toward him and then a click when the lock of the door opened. He was excited and opened the door with his shaking hands quietly. A sweet fragrance of incense was filled in the room. He grouped around the bed and felt a body in soft kimono lying there. He touched her hair. It was long and smooth. He was too thrilled to say anything. Then the lady said, “Oh, I’ve forgotten to lock a door. I’ll go to lock it.” She shrugged her kimono out and left it there, and walked to the door.

Heijyu got naked and waited for her coming back. He heard of the sound she locked the door, but she didn’t come back. Time passed by. He thought there was something wrong and got up, and then walked to the door. There, he found out that the door was locked from the outside the room. He got shocked. He was deceived. He was angry and thought about staying there until morning. But he had second thoughts when he heard servants awaking at the dawn, “I might be in hot water if I’m witnessed…” So, he left there before the morning.

After that, Heijyu tried to gather bad rumors about Jijyu to come to hate her. But his attempt failed. His love for her was just growing. But one day he came up with a way of taking a dislike of her. “She is very beautiful, but her feces must be as the same as others’. I might fall into disgust of her naturally if I squish her feces!” he thought. Therefore, he went to Tokihira’s residence again and peered around. Then, a 17 or 18 – year-old beautiful girl came out from Jijyu’s room. She was holding a chamber pot covered by a thin cloth, hiding it with a red fan. Heijyu got excited and followed her. He snatched the chamber pot from the girl’s hands when they were out of public sight, and dashed away leaving the crying girl behind.

Heijyu entered an abandoned house and locked the door from the inside. The chamber pot was a gorgeous box covered by golden lacquer with a lid. He was hesitant to open it because the box was extremely beautiful. But finally he nervously opened the box. Then he smelt the smell of cloves. He peered into the box with wonder, and then saw three pieces of two or three-inch brown lumps in yellowish water. He thought, “Oh, that’s it…” and stuck a piece with a chunk of wood and sniffed it. It smelt like a solid perfume called Kurobo made from cloves, agarwood, sandalwood, and musks and so on. He licked the liquid and the lump like a person possessed. It tasted a bit bitter and sweet.

Because Heijyu was a fast thinker, he noticed that the urine-looking liquid was made by boiling cloves and those lumps were boiled yams with some solid perfume and sweetening. He thought, “What a wonderful lady she is! Who else can come to think of me trying to get her chamber pot? I would kill for her!” He was obsessed with her and got sick, and then died at last…

It is amazing that this interesting story was written 800 years ago! The episode of feces or urine is extreme and unusual, but our feelings on amorous things have not changed so much since such an ancient time. Too much spoils…especially regarding love affair…