All of a sudden, someone turned the lights off in the room, and my vision went black. Then the door opened silently and a birthday cake emerged with its candle lights in the darkness. 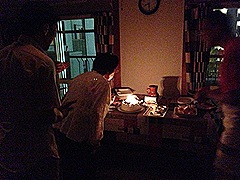 All the people at the place sang the song together for my mother, who turned 82 years old. The party was held at the end of July but my mother’s birthday was August 1st officially. Actually my mother was told by her mother (=my grandma) before her death was that her real birthday was July 29, though….

To tell the truth, the party was not for my mother’s birthday. It was a special event entitled “Las 20 tapas y el vino a porron” held by a Spanish friend Mariano. I took my 82-year-old mother to the party. I had asked Mariano to celebrate my mother’s birthday on ahead, but I had not told to my mother anything about it, of course.

For an 82-year-old Japanese lady like my mother who has never travelled overseas and has lived in a small island like Japan all her life, it is quite rare to have a chance of communication with foreigners even in the 21st century. That is why I thought that it would be nice for such a lady, especially for a recovering person from illness, to have an opportunity to enjoy Spanish food with various people. My mother was hospitalized for a skin cancer in June. I wanted to cheer her up.

It was very hot night when the party was held. It was probably over 30 degrees even at night. In such a hot condition, Mariano cooked 20 kinds of dishes! All of them were delicious! Muy deliciosso! The party started with sangria, and then Spanish omelets, pinchos of tomatoes, olives and cheese, of shrimps, olive, and sliced smoked salmon, of eggs, jalapenos, mackerels, and ….I can’t introduce the 20 kinds of foods here…anyway everything was wonderful! 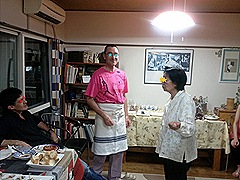 It was the first time for me to meet most of the participants at the party, and of course, my mother had never met all of them. However, all the partiers were nice and kind to my mother and celebrated her birthday, too. They served and were attentive to her. I really appreciated it. I would like to thank them. My mother and I were very touched.

Yes, my mother was very impressed by the people’s concern to her. But I was very surprised when she stood up suddenly and walked to the others at the end of the party. It was the first time for her to talk to Spanish and Mexican people, but she gathered courage to say “Gracias” to them. Actually, it was the first time for her both saying a Spanish word and trying Spanish food!

All of the food was delicious! All of the people at the party were wonderful! My mother and I had a great time in the mixed Spanish and Japanese languages atmosphere. On her way home, my mother muttered “I’m happy to live longer…”