“Satchan!” I called out my friend’s name when I found her in the hotel’s lobby. She was sitting with her teacher. Where was I? I was in a hotel in Toyohashi to attend a Tai Chi training camp, which was held on October 4 and 5. Satchan was there to take a test for becoming a shihan( Tai Chi master.)

The Tai Chi training camp is held every October. I’ve joined it since I was a beginner and this was probably the seventh time for me. The participants practice Tai Chi together and learn theory with some actual movements. In addition, there is an examination for becoming a Tai Chi master. Actually, not everyone can take the test. Test-takers have to fulfill all the conditions: having already the pre-master certification and five years further after taking it, a membership of Tokyo head office and a recommendation letter from their teachers. It takes at least ten years to qualify for taking the test after starting to do Tai Chi. 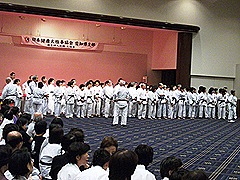 Satchan met all the conditions. That was great! Actually, there were more than 80 people who were going to take the test this time! Wow! Mr. Kawamura was also included. He and I are learning from the same teacher. So, I came to the place not only to practice Tai Chi and meet my friends but also to cheer him at the test this time. 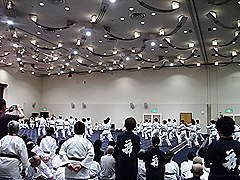 Actually, I did not know that Satchan was going to take the test there until I found her at the hotel. I had thought she would take it at another opportunity in Tokyo because she had not mentioned anything about her participation. It might be because she and I are not “Tai Chi” friends. We are “English” friends. I mean, we got to know each other through English classes. I did not even know she was also doing Tai Chi when I started. That is why, we seldom talk about Tai Chi when we meet. Interestingly it was the first time for us to see each other in uniform, which is originally for karate but is our school’s (Yang Ming-Shi Simplified 24-Form Tai Chi) official costume.

The test-takers were divided into two groups. Satchan and Mr. Kawamura were in the  latter group. Besides they were standing next to each other. So It was lucky for me because I was able to take photos of them once. All the examinees looked nervous before their names were called, but once the test started, interestingly the audience seemed to be more nervous than the performers. Fortunately, all of the candidates passed the test. Congratulations!