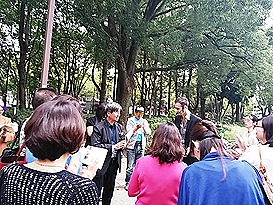 This is the continuation of the former article – Nagoya Castletown Trivia 1: The Lost Purple River and the Phantom White River

In the middle of the Edo period, the Tokugawa Shogun Yoshimune imposed strict rules throughout Japan due to fiscal austerity. The constraint extended over samurai warriors, who were controlled by the Laws for the Military Houses called Buke shohatto in Japanese. That is, he prohibited the nation from enjoying dressing up, extravagant ceremonies, festivals, going to the theater and so on.

However, Tokugawa Muneharu, the domain lord of Owari, which is now called Nagoya, disobeyed him. He ignored Buke shotatto and Yoshimune’s order to stimulate the economy. For example, he walked around in richly decorated costumes, held big festivals, built many theaters, and developed red-light districts. That was why, this area’s economy boomed and many people, artifacts, and cultural activities were pouring in from all over Japan.

Moreover, Muneharu encouraged warriors to take on other jobs as a sideline. Actually, warriors were suffering economic hardships despite their high status. They were able to enjoy leisure activities by this additional income. Most of them earned money as teachers. There were many small private schools called terakoya here and there in the Edo period. Merchants, farmers, many people learned reading, writing and arithmetic there. It was not only men but also women who studied at these schools. 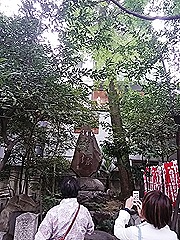 The most popular textbook for reading among girls was The Tale of Genji. Girls went crazy over the imperial love story of the Heian period. So, it is no wonder that someone conceived of creating something related to the story to gain new students. There was competition between schools like in the present day cram schools. Ah, yes! That monument of Murasaki Shikibu (the author of The Tale of Genji) in Denko-in Temple might be one of the advertisements! (If you do not know what I am talking about, read my former article, please! ) At least, Mr. Fukada thinks so. That is why he believes that the name of the Murasaki River is derived from another origin, not Murasaki Shikibu. According to him, murasaki means ahead (saki) of the village (mura). Oh, I see… 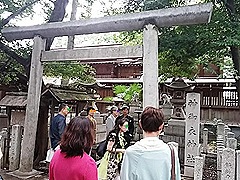 Now, there used to be an entertainment center in this area by the Murasaki River, which does not exist anymore. It had many theaters and was also a major red-light district. People called going to the area “go to Murasaki,” at that time. Many warriors indulged in sex with prostitutes. And if someone became hook on a certain woman, they said about him, “He’s stuck in Murasaki.”

The tour participants left Tsutamo, the restaurant, and went to the site where there used to be the stone monument of Murasaki Shikibu, and Shirakawa Koen Park, which used to be the enclave for the families of American soldiers in the postwar time, and then arrived at a shrine called Wakamiya Hachiman. 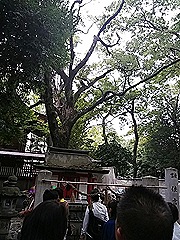 Wakamiya Hachiman was built in the 10th Century near Nagoya Castle, but was moved to the present place for its castellation in the 17th Century. Actually, there are other shrines in its grounds, such as Goshin-i Shrine, and Sumiyoshi Shrine. Goshin-i Shrine relates to sewing. That is why it has a memorial service for broken needles once a year and has many stone monuments engraved with names of apparel companies, such as Brother Industries, Organ Needles, and Kanebo. Sumiyoshi Shrine was built in 1959for preserving nine wind-up dolls, which had been rescued from the fires of the war. You can see the dolls once a year on November 15, which is its ritual day.

I was able to learn many things about Nagoya’s history through the lecture and tour. The lunch was also wonderful. I had a great time!