“I said JUST eleven!” Professor Miura said, looking at Chris from the corner of his eyes again.

Professor Miura is a specialist in castle architecture at Hiroshima University. Chris Glenn, the famous radio DJ and samurai expert in Japan, was interviewing him about Nagoya Castle’s gates and watch towers. It was November 15th and I was attending the lecture.

The number eleven, Professor Miura mentioned, indicates the number of watch towers in Nagoya Castle. Watch towers were the buildings for looking out, the strongpoints of defense, and arsenals before the Meiji Era (1868).

“I said JUST eleven!” Professor Miura said again. The whole room was filled with giggling. You know the reason if you have read my former article (Nagoya Castle’s Castle Gates and Watch Towers 1: Death Box). Actually, almost the same thing had happened a few minutes previously when he mentioned the number of castle gates in Nagoya Castle. He said “I said JUST six!” at that time.

“Why did you say JUST eleven?” Chris asked him, rolling his eyes. Professor Miura nodded approvingly and said, “There were more than 80 watch towers in Hiroshima Castle and Okayama Castle. Kumamoto Castle and Himeji Castle had over 100 watch towers! Therefore, the number of watch towers in Nagoya Castle was extremely small.”

Interestingly, the designs of the watch towers in Nagoya Castle are all different. Their size, style, shapes of roofs and windows and everything are diverse. Professor Miura gave a funny example to illustrate this uniqueness. “Imagine all the fighters in the Japan Self-Defense Force are different.” Oh, I see…

One big difference between Nagoya Castle’s watch towers and those of other castles except for its diversity is their largeness. Each tower is as big as other castle’s main buildings (donjon). After the lecture, the participants had a rare opportunity to tour one of the watch towers. It is called Seihoku-Sumi-Yagura, and used to be the main tower of Kiyosu Castle, which was the castle of Oda Nobunaga, one of the most powerful feudal lords in the Age of Provincial War (the 16th century). That is why the watch tower is also called Kiyosu Yagura. 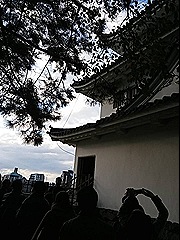 Although the number of watch towers is very small, the scale is more impressive than other castles due to the capacity of Nagoya Castle’s watch towers. Moreover, Nagoya Castle had a series of huge roved corridors which surround the main enclosure of the castle. It was called Tamon-Yagura and was also a gigantic store-room for weapons and armor. The width of the corridors was about six meters and the dimensions were equal to more than 300 watch towers from other castles. Unfortunately, this has not been rebuilt yet after it was burnt down by air raids during the Second World War.

I wrote in my previous article that enemies could not enter through the castle gates or other places. The reason is the existence of this huge series of corridors. It was impossible to break into the main enclosure of the castle through the strongest gates and the roofed huge corridors at that time. Actually, the corridors had a disconnected fireproof compartment, and the idea of fire protection was introduced to castle architecture for the first time in Japan. Not only its military preparedness but also the concept shows that Nagoya Castle was the most advanced architecture in Japan in the 17th century.

Professor Miura shouted, “Nagoya Castle should be rebuilt to its original style including Tamon-Yagura! It is Nagoya City’s duty!” Yeah! I would like to see the beautiful appearance of Nagoya Castle with the legendary Tamon-Yagura! 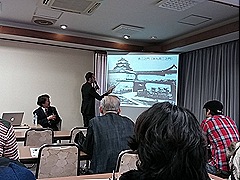 “I said just six.” Professor Miura said that with a sidelong glance at Chris. “I said JUST six.” He repeated.

It was November 15th. I was attending a lecture on Nagoya Castle. The lecturer was Professor Miura of Hiroshima University. He is a specialist of Japanese castle architecture. The MC was Chris Glenn, who is famous as a radio DJ and samurai expert in Japan. This lecture’s theme was the gates and watch towers of Nagoya Castle.

“As I said, there are JUST six castle gates in Nagoya Castle. This number is very small. For example, Himeji Castle has 19 gates. Why does Nagoya Castle have such a small number of gates? Because it didn’t need so many gates due to each one’s strength, such as Masugata-Mon Gate.”

Masugata-Mon is a box-shaped gate. Once enemies entered the box, they would be shot to death by ambushing guards. No one could either move through or return alive from the gate. That is why Chris called the gate “Death Box.”

The present main gate of Nagoya Castle, which was rebuilt after the World War II, is a replica of the gate called Fujimi-Yagura from Edo Castle. But the original one was a “Death Box.” So Professor Miura was shouting, “That gate is not a part of our castle! We should rebuild the gate to its original appearance!” Yeah, he is always passionate about Nagoya Castle…

The other gates were also strong. The gate called Omote-Nino-Mon is also known as Kurogane-Mon, which means “iron gate.” It was made from iron just as the name suggests and was about 21 centimeters thick, protecting against not only bullets but also cannon balls in the Edo period. Ninomaru-Ote-Nino-Mon is a gate with a big roof. This type of gate is called Korai-Mon. Korai-Mon were excellent at preserving the construction materials against deterioration because of the weather and its unique shape was to allowed archers to shot arrows.

Therefore, the reason there were only six gates in Nagoya Castle, is each gate was much stronger than the other castles’ gates. But you might think, “But enemies can enter the castle from other places.” Actually, they could not. I’ll write about that next time.

“Oh, this is wrong!” Professor Miura shouted, pointing at the information board reading “The stone walls of the castle tower are inclined that the upper parts are curved outwards. This incline is called ‘kata-kobai’ and can bear the heavy weight of the stones and high pressure of the soil. In addition it is beautiful.” “Everything is wrong, except ‘beautiful’,” he added. Actually, the castle tower of Nagoya Castle has S-shaped edges.

Last Saturday I attended an interesting lecture about the stone walls of Nagoya Castle. The event was held by Nagoya International Tourism Association (NITA), whose deputy director is a DJ of ZIP FM, Chris Glenn. He is famous because he is not only a radio personality but also an ‘otaku’ of Japanese castles. He was the MC of the event, and the lecturer was Professor Masayuki Miura of Hiroshima University, who is a leading expert on castle architecture. 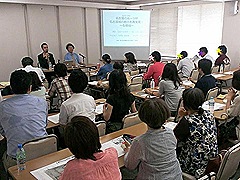 The place where the lecture was held was an oldish spooky building called Ohka-kaikan near Nagoya Castle. I did not see any ghosts there, but I could not stay inside alone. Along the eerie stairs, I finally opened the door and I felt relieved. There were about 40 living people in the room. Surprisingly, the student sitting in front of me was Nagoya’s Mayor Kawamura. After the 90-minute class about the stone walls of Nagoya Castle, the participants went to the castle with Professor Miura and Chris. I had visited the castle many times, but it was the first time for me to look at the stones so intensely.

Nagoya Castle was built on a marshy area to prevent invasion by enemies. That is why, the castle tower has been sinking since it was constructed about 400 years ago. You can see a Chinese character which expresses the number three on a stone in the second layer of its stone walls. It means that the stone used to be on the third layer. The first layer has sunk completely below the ground. The castle tower does not lean because of its method of construction. There are wooden bars called dogi under the base stones. They make the building sink uniformly. It seems the castle has sunk from 50 cm to 1 m during 400 years.

Most of the stone walls of Nagoya Castle were piled by the two ways mainly: Nuno-zumi (to make all of the layers uniform height) and Ran-zumi (to pile the stones at random). The arrangement of stones has also two methods: Uchikomi-hagi (to fill gaps with small stones) and Kirikomi-hagi (to put the stones without spaces), and the castle’s stone walls were mostly made by the former. But since the Meiji era, walls have been mended by the technique called Tani-zumi, which is to put stones in sideways. It is because the method is easier to pile stones and it looks beautiful. The strength, however, is much inferior.

There was a big earthquake in 1891, and the broken parts were mended with Tani-zumi by the Imperial Household Ministry. According to Professor Miura, the repaired parts were terrible. He predicted, “All of the parts mended by the Imperial Household Ministry will tumble into ruin if a big earthquake hits the Nagoya area, but the original stone walls which did not break in 1891 won’t unpile. I can’t wait!”

The length of the stone walls of the castle is about 8.2 km. This large scale construction was done in just a half year. The founder and first shogun of the Tokugawa shogunate, Ieyasu Tokugawa ordered 20 feudal lords to build the stone walls to prevent their rebellion, and he took away their money and drive power of opposing to him. Those lords were subordinate warriors of Hideyoshi Toyotomi, who had ruled over Japan before Ieyasu. Nagoya Castle needed three times as many stones as Hideyoshi’s Osaka Castle, and the scale of its castle tower was as four times as big as Osaka Castle.

All of the stones for building Nagoya Castle were quarried from Shinojima Island. They were carried along the Horikawa River via Ise Bay. You can see words or marks carved on stones in the castle. It was to prevent the different building teams from stealing each other. But there was a big stone under the castle tower on which the name of a powerful lord, Kiyomasa Kato, is carved to assert his power in perpetuity his power.

Speaking of Kiyomasa Kato, there is another big stone called “Kiyomasa-ishi”, or Kiyomasa’s stone, in the castle. It has an information board explaining that Kiyomasa was standing on the stone when it was carried into the castle. However, Professor Miura denied the story. According to him, the stone walls which have so-called “Kiyomasa-ishi” were made by another lord, Nagamasa Kuroda, whose father, Kanbei Kuroda, is the protagonist of the long-running historical drama on NHK TV this year. Professor Miura claimed that the stone should have been called “Nagamasa-ishi,” or Nagamasa’s stone! 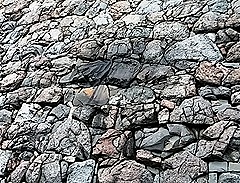 You might notice that some of the stones have cracks or are reddish when you see Nagoya Castle’s stone walls. They are due to being exposed to high temperature when the castle was burnt down by the air-raids in 1945. Most stones of the walls are granite, which is weak against heat. Iron in granite changes to ferric oxide by heat and reddens the stones. Unfortunately, Nagoya Castle’s castle tower was lost in the war, but still now you can see most of the original stones… 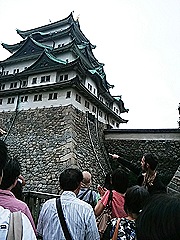 Actually, I learned much more about the stone walls of Nagoya Castle. I cannot write all of it here! I had never thought that I could learn so many things about the stones and the castle’s walls, nor looked at them so intensely before the lecture and tour. Professor Miura and Chris talked passionately about the castle and its stone walls. I am sure they can enjoy drinking for at least three hours with the theme…Professor Miura said, “Nagoya Castle is the best in Japan to study the stone walls!” And Chris said, “If you want to see Kiyomasa’s name clearly on the stone, you should come here at around 4:30 p.m.” Well…why don’t you come to Nagoya Castle to see the stone walls and stay there until the closing time?