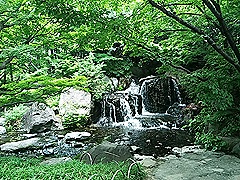 “This garden’s name, Shirotori, means white birds, such as swans. Many birds have found sanctuary in this place and gather. That’s why this place was named Shirotori….” The guide started leading the participants in the park…

There was an interesting event in Shirotori Garden near Atsuta (-Jingu) Shrine last Saturday. They invited some foreign ladies who live in Nagoya and got them to talk about Japanese culture showing their own art works. Actually, the event had other programs: Tea ceremonies and English guided tours. I decided to take part in a guided tour at 10:30 and then go to the talk show at 11:30.

It was my first time to visit the garden, though I have lived in Nagoya for a long time. One of the reasons is that the park requires an entrance fee: 300 yen for adults, 100 yen for citizens of Nagoya aged 65 or older, and free for children under the age of 14. If you come to the place with a one day ticket for Nagoya City’s public transportation, you can enter for 240 yen (20% off!).

The English guided tour was supposed to start at 10:30, but the tour had already started when I arrived at the gate before 10:30. One of the staff members explained that they had made a group depart earlier because more people had gathered than they had expected. According to her, the next group would depart later. But I decided to join the first group because I found two of my friends in it.

This place is located by the Hori-kawa River. The river was canalled to carry building materials for Nagoya Castle in the Edo period (the 17th Century), and the site of this garden used to be a pond for keeping the timber. After the completion of the castle, the place had been used as a lumber port. But Typhoon Vera a.k.a. the Isewan Typhoon in 1959 brought big damage to this area and the timber yards were decentralized. By the beginning of the 1980s, the lumber port was no longer required because of the decentralization and increasing imported materials.

Then, it was reborn as a Japanese garden for the World Design Exposition in 1989. After the event, it was opened to the public. This garden features a path around the pond and is designed to express the landscape features of central Japan. For example, there is an artificial hill near the gate of the garden. It represents Mt. Ontake in Nagano Prefecture. The big pond in the center of the garden represents Ise Bay and the stream the Kiso River. The garden even has a mock spot called “Nezame-no-toko,” which is a famous scenic place in Nagano Prefecture.

The garden has a cypress tree planted by Ms. Wangari Maathai, who was a Kenyan political activist and recipient of the Novel Peace Prize in 2004. She was very popular in Japan because she promoted an environmental protection campaign in 2002 using a Japanese word, “mottainai,” which expresses a sense of regret and concern over waste. It also has a tea house and Suikinkutsu, which is a garden ornament and music device.

Many flowers and trees are in the garden, and they show you different expressions each season. Hydrangeas and gardenias were in full bloom when I visited the park. The beautiful autumn leaves will welcome you in the fall. Even after snow, you will find breathtaking scenery there. The entrance fee of 300 yen is reasonable for the beautiful site. Why don’t you come by Shirotori Garden when you visit Atsuta (-Jingu) Shrine?